Welsh Proms to remember fallen of WW1 buried across Wales 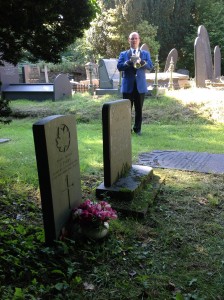 The Commonwealth War Graves Commission (CWGC) has teamed up with the Welsh Proms to encourage the British public to visit their local war graves and discover the stories behind the names of those who gave their lives in the First World War.

Performers from local brass bands will be playing the Last Post simultaneously at the graves of two known Somme casualties buried in Wales, on Tuesday 19th July at 11am, ahead of the special Somme commemorative Proms that evening.

The CWGC has launched its Living Memory Project across the UK to remember the forgotten front; the 300,000 war graves and memorials in Britain from both world wars, in time to mark the centenary of the Battle of the Somme 1st July – 18th November 2016.  The Project aims to encourage community groups to discover, explore and remember their war heritage – with everyone in the UK having at least one war grave three miles from their front door.

A spokesman for the Welsh Proms stated: “The Battle of the Somme was one of the the largest battles of the First World War, and among the bloodiest in human history. There were approximately 1 million casualties of the Somme offensive – killed, wounded and missing.

The welsh division suffered 4,000 men wounded, killed and missing at Mametz – they were not all killed. These soldiers were drawn from all over Wales, and represented north, south, rural and industrial areas, as well as men from the London Welsh. With the support of our partners we are honoured to be able to offer this tribute in their memory”

Funding and creative resources are available to help groups identify a CWGC war grave near where they live. This can be to help towards researching about some of those buried locally and to stage a commemorative event.

Any community group interested can register now by emailing livingmemory@cwgc.org or visiting www.cwgclivingmemory.org

CWGC Director of External Relations, Colin Kerr, said: “The overseas work of the Commonwealth War Graves Commission’s is well known, but here in the UK, there is little awareness of the graves and memorials to be found in a more than 12,000 locations that commemorate more than 300,000 Commonwealth war dead of the two world wars.

“We believe this is wrong, and through the Living Memory Project aim to reconnect the British public to their commemorative heritage on their doorstep.

“With the support of the DCMS and DCLG, the Living Memory Project will encourage more people to discover and visit our war grave sites and remember the war dead in those places from the First and Second World Wars. We want them to share their stories and raise awareness with their wider communities.”

The project has been devised in partnership with community engagement specialists, Big Ideas Company www.bigideascompany.org.
For more information, contact: Katharine Lane on 077620 60628 or by email livingmemory@cwgc.org