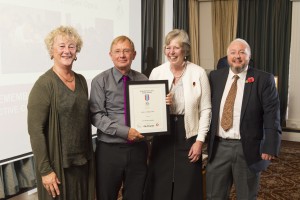 Receiving the award from ‘Remember WW1’ in the Army and Navy Club, Pall Mall. Winners of the category Arts and Creativity.
From L-R. Liz Rawlings, Research and Funding Officer; Dr Peter Grant, Cass Business School (one of the judges); Jane Mills, Chair Llangwm History Society; Sam Howley; composer of the opera “WW1 – A Village at War”.

The tribute came from Pembrokeshire County Council Chairman Councillor Tony Brinsden at a special reception at County Hall to mark the project’s success.

WW1: a Village Opera and its accompanying exhibition, designed to mark the centenary of the start of the Great War in 2014, won first prize in their category in the UK-wide Remember WW1 2016 competition.

Councillor Brinsden said that winning the award showed what could be achieved  in a very short period of time by determined people all pulling together for a common cause.

And he added: “I only wish I could engender some of that determination into these hallowed walls!”

Jane Mills, chair of Llangwm Local History Society, the organisation behind the opera and exhibition, said that although the team had received recognition in the national papers, it was ‘just lovely’ to be feted here at home as well.

She presented Cllr Brinsden with a copy of the DVD of the opera.

Cllr Brinsden said he agreed with the comments of one of the competition’s judges, Dr Peter Grant of Cass Business School in London, who said the opera would stand as one of the finest creations of the centenary, and would still be remembered 100 years from now.

Dr Grant, speaking after the awards were announced in London last month, also drew parallels between the opera and the works of composers Frederick Delius and Benjamin Britten.

He added: “To compare Llangwm’s ‘A Village Opera’ to two of our finest composers may seem an exaggeration but in Peter George’s poetic libretto and Sam Howley’s extraordinary music we have found a 21st century equivalent.

“I have heard most of the new classical pieces that have been written to commemorate the centenary of the First World War by esteemed composers from all over the world and ‘A Village Opera’ bears comparison with the very best.”

Another of the judges, and co-founder of the competition, John O’Brien said of the opera: “We were very struck by the ambition of this project, the mobilisation of so many in the community, its weaving of local stories into national events and the obvious significance it had in bringing the community together. To have such a project reach such a high standard and achieve its aims requires dedication and determination which was evident throughout.

The opera and exhibition received grants from, among others, the Heritage Lottery Fund and the Community Covenant.

A concert version of the opera was included in the St David’s Music Festival this year and will be performed again in Pembrokeshire in 2018.