Digwyddiadau>Concert>“THIS IS YOUR EVENT WE WANT YOUR VIEWS!” War Memorial Concert & Information Evening

“THIS IS YOUR EVENT WE WANT YOUR VIEWS!” War Memorial Concert & Information Evening 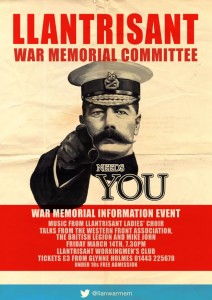 “Where should we build it? How much should it cost? What should the memorial look like?”

These are the questions which will be put at a special Llantrisant War Memorial Concert and Information evening on Friday March 14th.

The aim of the event, which is being hosted by the Llantrisant War Memorial Committee, is to provide an update on how plans to build a memorial in the town have progressed, and also to seek feedback from the people of Llantrisant on how the project should move forward.

Music on the night (including songs from the wartime era) will be provided by the Llantrisant Ladies Choir. There will also be informative talks from members of The British Legion, The Western Front Association and Mike John of the Llantrisant War Memorial Committee.

It has taken Mike approximately four years to identify over 80 young people from Llantrisant – with details of their Rank, Regiment or service – who gave their lives for their country.

Mike’s talk will focus on the interesting lives of those he’s researched including their backgrounds and where they fought. A list of the names Mike has unearthed to date will be available on the night.

The event will also feature an exhibition of rare maps which illustrate the battle lines and regiment details on the first day of the Somme. Posters from the era will be displayed and music sheets of the songs the Ladies’ Choir perform will be provided.  A raffle will take place during the evening with funds going to the campaign coffers.

Speaking about the event Councillor Glynne Holmes of the Llantrisant War Memorial Committee said: “Our research into the names of people who should go on the memorial is advanced. The three key issues we need to address now are on the proposed memorial’s design, its location in Llantrisant and how much it should cost. Feedback from the people of Llantrisant on these matters is crucial. Come along and let us know what you think. This is your event, we want your views!”

John Gilheaney of the Llantrisant War Memorial Committee said: “It is fascinating to learn how people from Llantrisant contributed to the war effort. The event will not only provide information on a very important project, it will also bring a key part of Llantrisant’s history alive in a vivid and entertaining way.”

Mike John said: “Llantrisant is one of the few towns in the UK not to have a memorial for its fallen. It’s about time it did.”

The Llantrisant War Memorial Concert and Information Evening will take place at Llantrisant Workingmen’s Club on Friday March 14th at 7.30pm. Tickets are £3 (Admission free for Under 18s). For tickets please contact Glynne Holmes on 01443 225678.

The Llantrisant War Memorial Committee is on Twitter. The address is @llanwarmem

A list of those from Llantrisant killed in action during WWl / WWll is online and can be found here: http://twileshare.com/bdxm. The names researched for the memorial to date include those who served in World War One, World War Two and subsequent battles in Palestine (1946) and Korea (1952). All of the soldiers were born or lived within the former boundary of Llantrisant which today covers neighbouring Talbot Green, Cross Inn and Penygawsi.